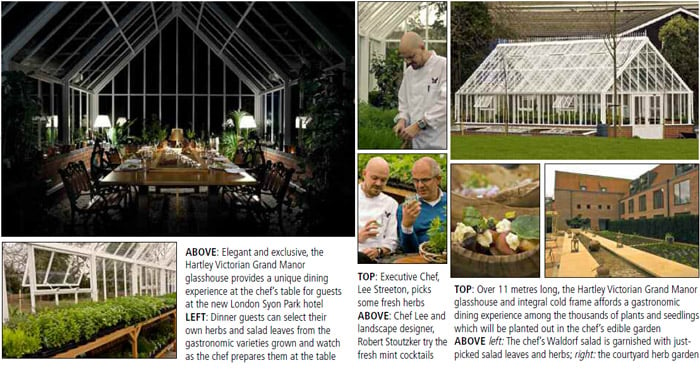 The fascinating heliquarium, or butterfly house, in the lobby of England’s newest luxury hotel prepares the visitor for the unexpected. London Syon Park, a Waldorf Astoria hotel set in the two hundred acre Syon House estate which has been home to the Duke of Northumberland for over 400 years, is no ordinary five star experience: it is a paradise for diners who like their food to be as fresh as nature can provide.

Step outside to witness the hotel’s unique edible landscaping, designed to assure a continual supply of bespoke, fresh, seasonal produce – special ingredients grown at the behest of Executive Chef Lee Streeton who plans to further delight guests with exclusive candle-lit dinners in the gastronomic Hartley Botanic glasshouse, clearly a setting like no other.

Lee is fulfilling a lifelong dream. Working with landscape designer Robert Stoutzker, founder of London Edible Gardens, he is creating Greater London’s largest edible garden in order to bring the freshest, tastiest produce to the chef’s table: herbs, vegetables, fruit and flowers, all grown in the hotel’s 2,200sqm grounds. This expansive, double-doored toughened glass, aluminium structure is the garden-in waiting’s engine room, the maternity ward, if you like, bearing new seedlings and plantlets in constant succession, to be transplanted out into the edible and herb gardens, replenishing stock as the kitchen depletes it.

This imposing glass structure has six auto roof vents and a further six manual vertical face vents to allow ease of temperature control, as well as guttering with downpipes to water barrels at each of the four corners for instant and essential natural rainwater supply.

But, of course, it is much more than a glasshouse. As well as ‘nursery’ duties, nurturing tender or heat loving crops such as cucumbers and tomatoes, the Victorian Grand Manor stages a unique dining experience for hotel guests.

It is a relaxed and informal affair, candlelit by night, where guests are invited to wander down the garden path to share an evening with the chef, seated at a delightful converted butcher’s block table. This unique venture was germinated when Robert Stoutzker, creator of ‘tasteful gardens good enough to eat’ and distinctive in his ‘London Edible Gardens’ van, was approached by Lionel Benjamin, who heads up Asset Management and Hotel Operations for the Ability Group, the developer and owners of the hotel.

This initial meeting led to Robert’s commission to evaluate and orchestrate an edible landscape at the Waldorf Astoria site.

His first action was to put a stop to shrub planting in a corner which he wanted to commandeer for the main outdoor edible garden.

“It was the most obvious site but the soil was really poor, so we dug in 20 tons of conditioner and rotavated five times before we had this great crumbly soil to plant in,” explains Robert.

He then took charge of the large but empty hotel inner courtyard area – the pre- designated herb garden conceived with cocktails and cuisine in mind – planting it up initially with hardier herbs to produce a succession of tender young plants in the pipeline.

Robert then planted an apple and pear orchard, to the side of the hotel lobby, which in the years to come will delight guests with billowing blossom in springtime, followed by home grown fruit come autumn for delicious desserts, savoury chutneys and sweet jams and jellies.

Despite quickly claiming essential outdoor space, Robert realised that he was going to require a vast glasshouse, a workhorse, to keep feeding the outdoor areas with a constant succession of young plants if the concept of year-round cooking with seasonal fresh produce was to succeed.

After considering numerous alternatives he chose the Hartley Botanic Victorian Grand Manor glasshouse which was installed at the perimeter of the site, in juxtaposition with Syon Park’s own magnificent glass domed orangery.

Robert said: “The Victorian Grand Manor’s build quality and modern yet slightly traditional design made it perfect for its chosen location in the grounds of the hotel.”

Hartley’s Managing Director, Johnny Mobasher, was thrilled to collaborate with Robert on the venture. “This was the first time in 70 years that we had been asked to produce a glasshouse-cum-restaurant and I could hardly wait to see it working,” he enthused. 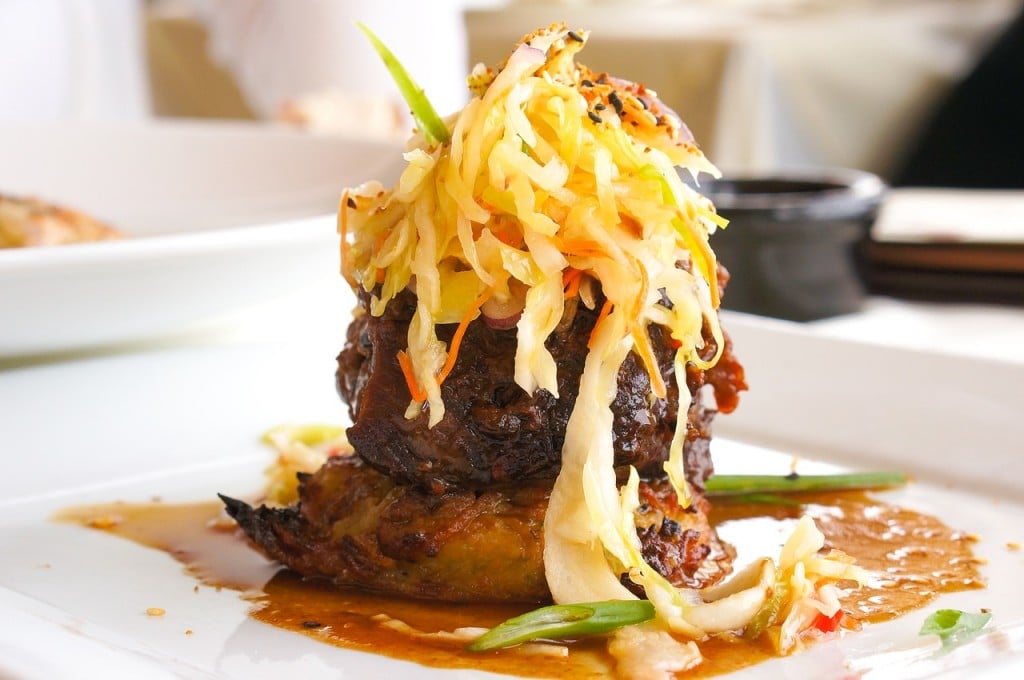 Coincidentally the site historically supported one of the largest private edible gardens in the UK, providing produce to the local area back in the 1800s.

Now, Robert works closely with Chef Lee to determine which vegetables, herbs, fruit and edible flowers to grow, and which specific varieties he needs to get started under glass before transplanting them into the garden.

There is a useful 11 metre stretch of cold frame running the full length of the glasshouse to harden stock off before it finally makes the big outdoors.

“Robert has designed our kitchen and herb gardens so that I can literally hand pick the best British produce, metres from the kitchen, moments from the point of cook or serve – it doesn’t come much fresher than that,” enthuses Lee, who offers a modern twist to classic British cuisine.

As well as a full complement of the freshest fruit, herbs and vegetables, Lee can smoke, bake or poach fresh trout from the hotel’s lake.

Whilst the focus is on freshness, flavour is paramount too and Lee is adept at pickling and preserving, be it vegetables or fish.

He is growing gherkins specifically for pickle purposes.

“It was important to focus on achievable requirements for our first year, so together with Robert we earmarked 24 different vegetables to cover year one.

“We chose the tastiest varieties of beetroot, carrots in three different colours, Jerusalem artichokes, courgettes for flesh and flowers, clambering runner and Borlotti beans, several varieties of tomato including Black Russian and Golden Sunrise and we are actually going to offer our very own potatoes all year round, including the sought after International Kidney variety, the onshore version of a Jersey Royal.”

In addition to getting the outdoor vegetables going, the glasshouse supplies and replenishes the courtyard herb garden, a tranquil area off the main bar, designed for easy bar and restaurant access. Here, guests can relax in outdoor seating by a quiet rill set with lanterns and candles of an evening.

The relaxing atmosphere is further enhanced by wafts of aromatic herbs plucked at intervals to provide ingredients for just-mixed rosemary and vodka cocktails or classic fresh mint mojitos.

So whether drinking or dining, from glass or glasshouse, guests can be assured a memorable and mouthwatering experience at the new London Syon Park hotel where the freshest, tastiest ingredients are served with five star style and panache plus a liberal sprinkling of innovation. And, yes, guests can pick their own food for the chef to prepare!